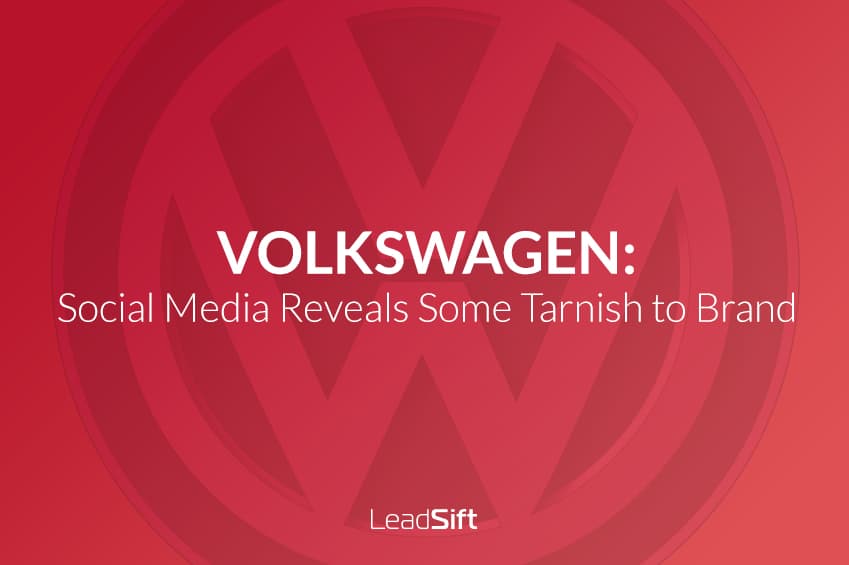 Volkswagen is making headlines worldwide. Coverage has dominated from the UK to the US (even the White House reacted), rocking European stocks across the board with Volkswagen shares plunging as much as 20 percent during Tuesday’s trade, following Monday’s news that it could face an $18 billion fine in the U.S. for rigging emission tests on its diesel vehicles. And the conversation isn’t contained to major news publications either. Social conversations about disgruntled and dismayed customers and the potential impact on sales can be heard loud and clear.

Imagine the show face that the US President and CEO of Volkswagen had to wear to unveil the 2016 Passat on Monday evening when news about Volkswagen facing a possible fine had hit the airwaves. The reaction on social was swift –  a 760% increase in volume of conversations about Volkswagen:

And to nobody’s surprise, negativity dominated the conversation. Negative brand awareness increased by 273% in the last 5 days:

Negative sentiment from existing Volkswagen owners increased by 200% and from the sound of these tweets, it appears that Volkswagen is at risk of losing the trust of their most loyal customer base:

@VW We’ve owned 10 VWs over the years and currently own 2. I am so disappointed in VW’s cheating software. How can I trust this brand?

The news has also resulted in a significant change in buying behaviour with a 55% decrease in buying intent – reflected in these tweets:

So I was thinking of getting a volkswagen…. — Dan McNamara (@HighQualityDan) September 22, 2015

Seems like the best time to buy a Volkswagen in the US, m thinking the passat #DeiselScandal #Volkswagen — Arka Majumdar (@JoNzYyyyy) September 22, 2015

And the overall Volkswagen social conversation driven by these words:

Volkswagen may take a tumble from the 3rd most loved brand on our Brand Intent Index, and someone will have to benefit – could it be:

Yep, I heard about Volkswagen’s big TDI recall…So, if I were getting another car I guess this means I’m gonna end up with like a Hyundai?

I was thinking of buying a volkswagen jetta. Reconsidering my decision now amid this scandal. Perhaps, Honda will win my business. #trust

Learn how LeadSift can help your brand identify consumers primed to purchase and much more – this 30 minute conversation can transform your marketing.