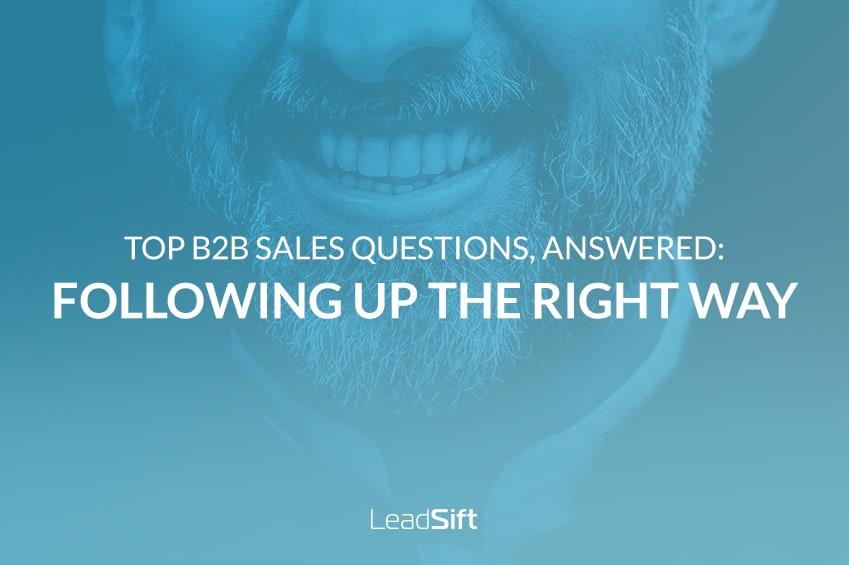 What’s that one thing you dread most when managing leads in your funnel? If you answered “following up,” you’re not alone.

Making that first touch with a lead is easy. You’re sending a cold email, making a cold call, or taking the next steps with an inbound lead. But being persistent is a different story. It takes repetition to break through to some leads, especially with the dramatic increase in content that passes through their inbox every day. Sometimes the only way to stand out from the crowd is to repeat yourself – more than once.

So how do you follow up with leads the right way? We’ve got three of your top questions below, answered.

1. How do I follow up without saying “I’m just following up”?

HubSpot hit the nail on the head with their 23 Better Alternatives to the “Just Checking In” Email article. The critical reason why “just following up” or “just checking in” are such poor emails – and receive such poor response rates from buyers – is that they don’t offer anything of value. It’s obvious you’re following up, since you’ve just sent them an email. What is the value to the buyer if they open it?

Of course, sending any of the example emails from HubSpot’s list would take a bit of research, or at least an understanding of your customer. And that’s why “just following up” is so popular – it doesn’t take any effort. However, your leads can smell your lack of effort a mile away, so it pays to take the time to put a little more thought into how exactly you follow up with them.

In addition to HubSpot’s list above, you can take a look at Pardot’s Anatomy of a Successful Sales Follow-Up Email blog post for more ideas on how to follow up, without saying you’re following up.

2. How frequently should I follow up with a prospect?

Typically, a salesperson will touch – that is, contact via phone, email, social or other method – a lead 1.3 times. But this isn’t optimal. In fact, if salespeople increase the number of touches to six, they increase the chance of making a contact by 70 percent.

Too many salespeople drop a lead early, missing out on the chance to develop it into a contact and an eventual sale. Try following up at least six times before giving up! People will make a purchase from you when they’re ready to buy, not when you’re ready to make a sale. So by repeatedly following up, you’re more likely to hit them when they have become a warmer lead.

3. When an inbound lead comes in, how many times should I follow up before dropping it?

These four mistakes combine to make many businesses shut down or deprioritize their inbound lead gen, when in fact it would just take a few tweaks to make the program a success.

For instance, many sales reps will follow up with an inbound lead once (and it’s best if that first call is made 5 minutes after the lead comes in), and drop it. However, just like outbound leads, persistence is essential to turn that lead into a contact.

The following methodology might sound aggressive, but it’s been proven to work by the folks at Intelliverse.

Try following up immediately after the call with an email and LinkedIn request, and then another one or two calls later that same day. Then, call a few more times, in the morning and afternoon, the following day. If you still have not made contact, try the same routine the third day. And, if there is still radio silence, log the lead and follow up with one to two calls and emails every week, until you touch base.