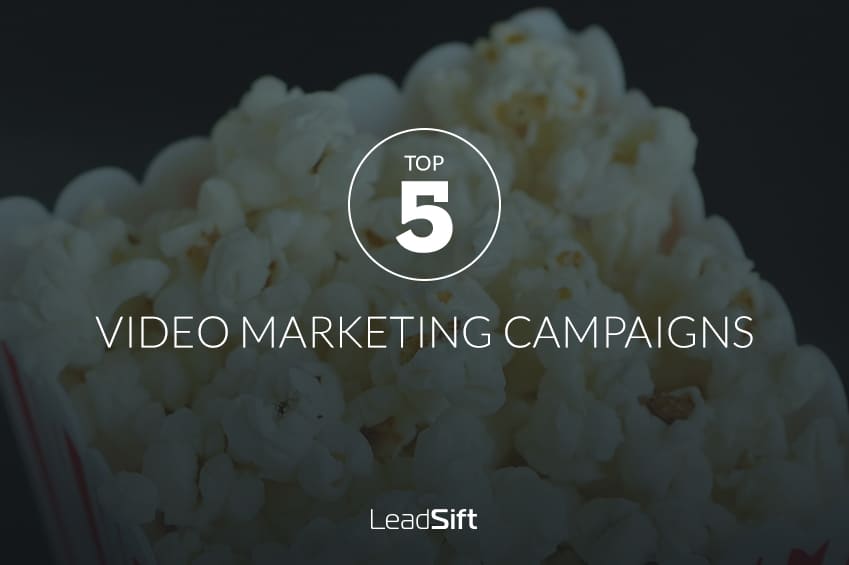 Online video now accounts for a massive 50 percent of all mobile traffic. How are you taking advantage of this consumer shift to video consumption?

Whether you’ve got a few campaigns under your belt, or you’re totally green when it comes to video advertising, it often helps to learn from the best. We’ve compiled 5 spectacular video marketing campaigns that range from polished Hollywood-esque mini-movies to emotional hidden cam gift-vertising, to inspire your own foray into video marketing.

What is it? HootSuite staffers sit in front of the camera and read “mean tweets” (a la Jimmy Kimmel) about their user interface. They read about a dozen real tweets sent in by users who call their UI everything from “truly horrible” to “something my kid slapped together.” The video ends with a swipe-screen update from HootSuite’s old (and old-fashioned) design to its newer, updated look and feel.

Why it works: This video is very tongue-in-cheek. It explains to current HootSuite users that they are rolling out some design changes using self-deprecating humor and a nod to pop culture. According to Vidyard, the under-two-minute video kept viewers engaged for a cumulative 130,000 minutes!

Key lesson: Use humor whenever possible. Funny ideas stick – boring ideas fade. Consumers are bombarded with so much digital content in their daily lives that if you can add a little humor (while educating them about your product), your video will stand out.

What is it? Through their partnership with The Avengers, Samsung uses a highly polished video to promote its Galaxy S6, Gear VR, and The Avengers Experience virtual reality game.

Why it works: This video campaign is all about story. In 7 minutes, you get treated to a mini-Avengers movie starring everyday people as the team. They meet, engage in banter at a Shawarma restaurant, get their equipment and fight evil robots. The story mirrors The Avengers, but makes it more accessible to Samsung’s customers.

Key lesson: Tell a story. You may not have the multi-million dollar ad budget that Samsung has, or the connections to big pop culture names like The Avengers, but that doesn’t mean you can’t tell a compelling story. Stories connect to people on both an emotional and intellectual level, so if your video has a narrative, it will be more likely to be shared, be liked and leave a lasting impression.

What is it? TD thanked its customers for voting it the “Highest in Customer Satisfaction among the Big Five Retail Banks” in Canada for the 10th year in a row by surprising them with gifts, personalized messages and more from their ATMs (automated thanking machines).

Why it works: This video garnered over 22 million views on YouTube and millions more social mentions across Twitter and Facebook. TD used video to highlight how it delights its customers, going beyond simple testimonials and really upping the “wow” factor by giving away plane tickets, baseball experiences and more.

Key lesson: Just try and watch that video with dry eyes. The customers that TD surprises are emotional as they receive their thoughtful gifts, and this, paired with the music and overall theme of giving thanks, makes for a very emotional video. Don’t be afraid to share genuine emotion in your next video.

What is it? Imagine working 24/7, 365-days a year. No pay. Little sleep. Waiting hand-and-foot on your associate. This video, which features interviews with potential job candidates, calls that position “Director of Operations”… AKA “mom.” The big reveal at the end, after the candidates hear the laundry list of job requirements and grueling work hours, is an emotional punch as well as a reminder to get your mom a card on Mother’s Day.

Why it works: This is a timely video, released a month before Mother’s Day – giving the campaign plenty of time to gain steam through its creative video and hashtag integration leading up to the day itself.

Key lesson: Seasonal videos can work well, if you time them right. Some videos are best launched on the day of a holiday, while others should be released well before. Timing is everything when it comes to video content, so make sure you are aware of the context surrounding your video marketing.

What is it? Recent break up? You need space, especially on Facebook. This video walks you through the steps you need to take if you want to block someone on Facebook. Plus, if you sense a reconciliation on the horizon, it also tells you how to unblock them again.

Why it works: Rather than a video that follows a step 1, step 2, step 3 format with screenshares and mouse overs, this video presents “how to” information using great visuals, real people, and a real scenario.

Key lesson: Be creative! If you are producing “boring” videos about using your product or new product features, consider how you could jazz them up by incorporating characters, narrative, visuals, graphics and other elements to keep your audience engaged.

Do you know of any other spectacular video marketing campaigns? We’d love to hear about them in the comments below.