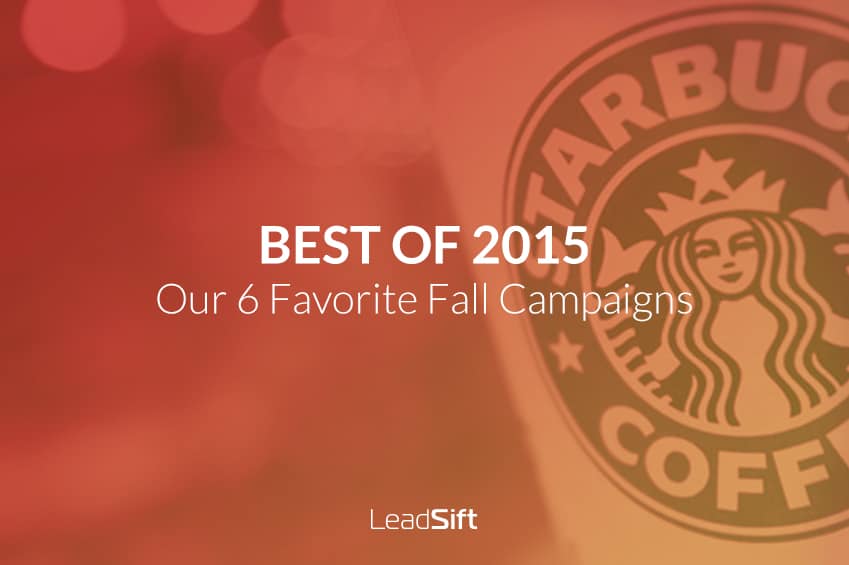 The air is crisp, the trees are turning red and yellow, and kids are back in school. It’s fall, and brands are embracing the cooler weather with even cooler social media campaigns.

From back-to-school trends to warm caffeinated concoctions, we’ve identified six fall campaigns that represent the best of the best when it comes to social media marketing.

This is plaid like you've never seen before. Now this is plaid, #TargetStyle. http://t.co/zpGknOI214 https://t.co/PMoY6XdBuQ

Target is kicking its #TargetStyle campaign into high gear this fall. The hashtag, used across Instagram and Twitter, promotes Target’s clothing throughout the year – but this fall, it’s all about plaid. Every stylish tweet, photo and video on Target’s social channels is filled with plaid. From plaid skirts to handbags, the campaign is one of the most cohesive of the season.

A huge thank you to artist @valeriemckeehan for her amazing work on this beautiful celebration of our new fall cup. #FallCup #Fall #ChalkArt #ad

No discussion of great social media campaigns would be complete without at least a nod to Starbucks. The coffee giant has a number of fall campaigns on the go, including #FallCup and #ToBeInCollege. Funnily enough, the purveyors of pumpkin spice lattes don’t seem to be pushing them that hard in their fall campaign this year, but they are highlighting new favorites like #ToastedGrahamLatte and #IcedSaltedCaramelMocha.

Fall is a great time to organize your garage. Learn how: http://t.co/T7zSL7jVh8 pic.twitter.com/mZ8kA1NsRA

Bed, Bath & Beyond makes seasonal changes to its in-store offerings, so it makes sense that its social media marketing would match. As the leaves turn color on the trees, Bed, Bath & Beyond’s social profiles are turning from warm-weather tips to fall tips and how-tos, like how to organize your garage, fall cleaning tools and tips for staying fit now that summer has ended.

In their typical minimalist style, American Apparel shares the latest fall fashions on its Twitter, Facebook, Instagram and other social profiles. While the clothing company doesn’t use specific hashtags to organize their campaign, they do weave the theme of warmer clothes, new fashion and timeless style into each of their posts.

Office supply stores like Office Depot live and die by the back-to-school rush. That’s nowhere more apparent than on Office Depot’s social profiles. Across Twitter, Instagram and more, the company shows off its back-to-school supplies using hashtags like #NewGearFeeling, #GearLove and #GearUpForSchool.

When you have an army of loyal customers taking beautiful photos of fall landscapes with your cameras, it’s almost a no-brainer to encourage them to share via social media. Nikon USA’s Twitter account has crowdsourced photos of fall using the #NikonNoFilter and #IAmGenerationImage hashtags, sharing the best photos taken by its followers. The campaign itself is simple, but the visuals it generated are simply stunning.

What are some of your favorite fall campaigns so far?