Intent Data in action within ABM at Intentsify, Fortinet, and Inverta 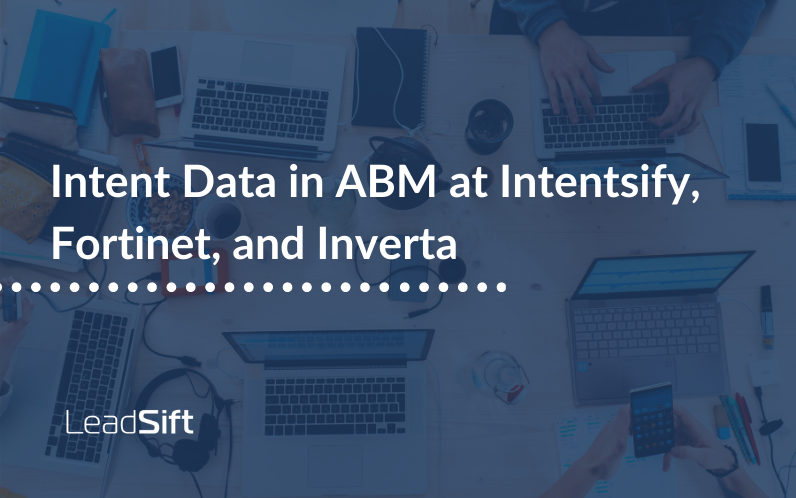 LeadSift’s CEO and co-founder Tukan Das hosted a live YouTube webinar featuring David Crane VP Marketing at Intentsify, Jamie Romero VP Corporate Marketing at Fortinet, and Kathy Macchi VP Consulting Services at Inverta where they discussed two of the hottest buzz words trending in B2B Marketing;  ABM and intent data. These guys were doing ABM and intent data before it was cool. This is the sixth article in a series of seven and this time we’re covering intent data in ABM examples.

Intent data at Inverta – picking a use case

A lot of Kathy’s clients are getting intent data and don’t know what to do with it although they know they should be doing something. She works with them to change that and to show them how to use intent to their advantage.

Kathy has picked use cases with clients around content syndication and BDRs and recommends that you start by picking a very narrow use case and working on it manually. That will give you some baselines to track progress and what’s really going on. You can identify whether keywords need changing later. She also recommends getting a team together in which everyone has a responsibility, walk-through it step by step, and analyze results. Her philosophy is that if some things don’t work, fail fast, pick another one and go. And, if what you have picked does work, then keep the same use case and figure out how to automate it.

When using intent data, David is seeing a 132% increase in BDR email open rate, a 46% increase in click-through rates and conversion rates to sales qualified leads jump up over a quarter of the range between 40% and 70%. He also sees conversions going way up in velocity through the pipeline.

He sees so many use cases for intent data,  which could be a little overwhelming for a lot of teams when it comes to knowing where to start. If you’re not careful, it can quickly get very broad, involve a lot of different teams and individuals and it can get really cumbersome to actually execute that strategy which, he says, is why it’s so important to focus on one use case, one pilot program.

Getting buy-in from Sales is also critical because they need to help you pick the topics and keywords to actually monitor.  He sees that In B2B,  there’s often a big chasm between what Marketing thinks are the most relevant topics and points to address and what Sales think that they should address. So, if Sales don’t help to select those topics and keywords at the beginning, the messaging will get corrupted as soon as it goes over to the Sales team – which will undermine the overall resource results.

Jamie’s experience of using intent data has highlighted the importance of defining how you’re measuring success, especially if you have a longer sales cycle and, in some cases, the success is demonstrated in the overall impact on the organization.

With one of his old customers, where they were doing a hundred thousand accounts and the ultimate long term measure of success was pipeline generation which took months to generate incrementally, Jamie’s team did split tests to show that they were getting 20-40% percent increases in direct mail response rates with a direct correlation between direct mail response rates and pipeline. So, while the revenue wasn’t necessarily attributed to the intent data, with a baseline of 10% conversion rate and a rise to 20%, you can infer that half of that is as a result of the changes made to the overall program.

Pretty much every time Jamie has run intent data campaigns he has also a cohort analysis and he sees markedly improved response rates on almost every channel across the board. Some went up by two or three percent and others by double, or even triple, figures. The key thing, he says is that you have to set a plan to measure the impact and look for that impact in order to see it.

In the last article in this series, we will be diving into intent data and Marketing Attribution, read it here, or watch the full YouTube webinar here: