How RevOps.io created a newsletter that we’re all talking about 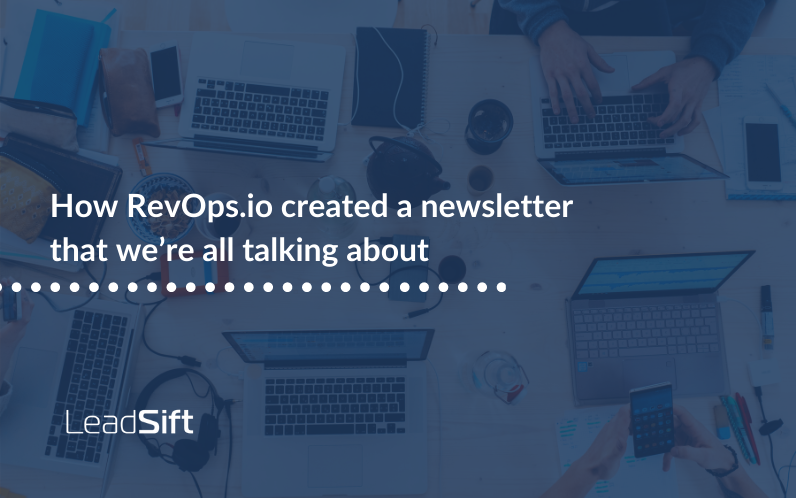 In Episode 17 of the Show Me The Data Podcast, Leadsift CEO Tukan Das spoke with Mark Lerner, Head of Marketing at RevOps.io about his very different kind of email newsletter that has gained impressive traction. RevOps flagship product streamlines the sales team’s proposals from CRM to Billing with one-click integrations to complete customization. The company’s newsletter has become one of their strongest growth channels and Tukan wanted to learn about the unique and fascinating way that they have achieved this. We wanted to know everything from why Mark chose this style of the newsletter to how he makes it happen.

In this first article, we’re diving into what makes RevOps’ newsletter different and why Mark decided to do it this way.

RevOps’ position in the marketplace

RevOps are a very early-stage startup and Mark had only been with the company for 5 months when we spoke with him. They offer CPQ software (Configure, Price, Quote) that allows salespeople to build quotes as flexibly as possible whilst experimenting with their pricing within parameters set by their managers. This avoids producing incorrect quotes and having deals rejected.

RevOps founders built the product to satisfy a need that they saw to get the right sales agreements to the right prospect at the right time whilst avoiding anything falling through the cracks. They were recently a featured product at tech product curation website Product Hunt.

When Mark joined RevOps, they were relying on founder-led sales and word of mouth to create leads. With his extensive background in director/VP level marketing within the technology space, Mark knew that he needed to build a top-of-the-funnel process to start driving demand. This meant creating engaging content and bringing people into a community. However, with a blog in its infancy and a limited number of lead magnets,  RevOps didn’t have a library of content to draw from.

So, Mark spent a lot of time trying to figure out how to start building that engine without doing the traditional weekly/monthly sharing of blog content. The answer came to him one night when he couldn’t sleep! Inspired by the Daily Sales Motivation Newsletter (sent every day) from Close.com that links to a YouTube video featuring CEO Steli Efti, he realized that he didn’t need to be the writer of the content. Instead, he could curate content and the company would still get the value of the apparent thought leadership from curating it. And so the idea of having a daily newsletter, in which RevOps curated 5 to 10 pieces of content, wrapped in RevOps branding, that were relevant to their target audience, was born.

Because he didn’t think much would come of it, Mark didn’t talk to his team about it and just set about testing it and promoting it organically himself. Then, he started seeing inbound leads, come in and Mark knew that he was on to something which works! This Newsletter has grown about 300% in the three months prior to our interview with, at times, an impressive 40% open rate and 15% click-through. This has enabled RevOps to build an audience and a community.

In Episode 17 of the Show Me The Data Podcast, Leadsift MD Tukan Das spoke with Mark Lerner, head of marketing at RevOps.io about his very different kind of email Newsletter that has gained impressive traction. In this article, we dive into how Mark curates the content.

How RevOps curates content in an hour a day

It takes Mark (the sole marketer at RevOps) about an hour every morning to create the newsletter. Figuring out how to create this kind of newsletter involved what Mark describes as a ‘Frankenstein’ combination of Zapier and RevOps marketing automation tool.

The daily process is:

It can sometimes be difficult to find five unique and interesting pieces of content around Revenue Ops – which Mark sees as part of the value of the newsletter as it’s not easy to break through the noise.

Initially, Mark was hesitant to do anything that seemed promotional within the newsletter. He really wanted to build an engaged audience before putting out any offer. Providing as much value as possible before asking for anything is something that Mark learned from Gary Vee’s. ”Jab, Jab, Right Hook” philosophy.

Over the month prior to our interview, the company switched emphasis from the building of awareness to promoting the product. Mark had, then, been working on creating a way to use the newsletter as a tool to push people down the funnel without ruining the value that they are providing. Now, whenever RevOps publish a blog, he will include it in the list – usually first. Sometimes, he will use the message at the top of the list to call it out.

Initially, Mark sent the ‘RevOPs Daily’ newsletter 7 days a week. However, when sending the newsletter out over the Christmas & New Year’s holidays, with previously low levels of unsubscribes, he noticed a much higher level. So, he has refined that to Monday through Saturday having realized that seven days was too much. He’ll send daily Newsletters Monday to Friday and a synopsis of the top articles (those with the most clicks) from the week on Saturday. What really made the difference to unsubscribes was that above the ‘Unsubscribe’  in larger letters, he wrote ‘Change Email Frequency’ with the option to receive emails daily, weekly, or monthly – this decreased unsubscribes by 50%!

Charge your marketing with relevant leads