How Forcemanager launched their first virtual event in just 6 weeks 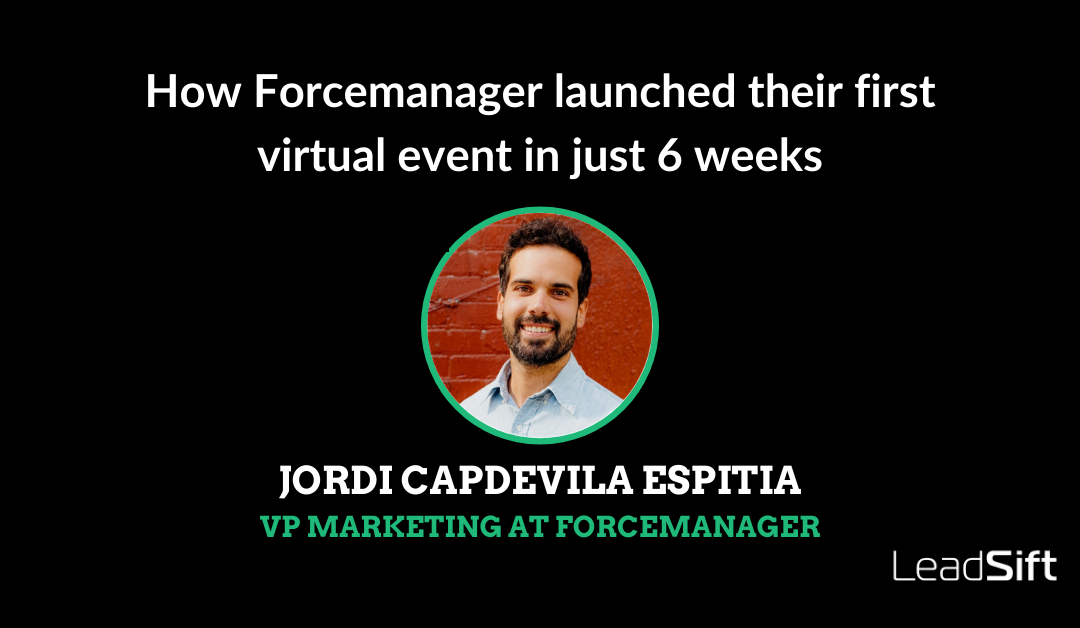 Alex Field, Leadsift’s Head of Growth was lucky enough to chat with Jordi Capdevila Espitia, VP of marketing at mobile CRM platform, Forcemanager, just 3 weeks after their first-ever virtual event (The Digital Sales + Summit, May 2020) hit the marketing world by storm. Here we share the background to that success.

Why a virtual event strategy?

Forcemanager is the leading mobile CRM for field sales teams. It transforms a smartphone into a modern sales assistant. With no ‘field’ to physically work in when COVID hit, the Forcemanager team had to think quickly. Jordi describes it as ‘the perfect storm’ to launch a virtual summit, which had been in discussion internally for a while, as it offered them the opportunity to nurture and educate their prospects and customers through the global pandemic. So, they gave themselves a five to six-week window to make it happen.

The goal was to position the Forcemanager team as thought leaders

The beauty of the virtual summit was that it offered Forcemanager the opportunity to:

The project went viral within Forcemanager

Jordi told us that there was so much excitement about the virtual summit that it went viral inside the company as more and more people wanted to collaborate. Eventually, 20 to 30 of the 120 people in the company were involved, particularly in the promotion phase.

This was one of the most successful campaigns that Jordi has run and he attributes that to the cross-company buy-in which made a huge difference to the marketing team. To Jordi, this meant that he and his team were doing a good job which made the external part of the promotion of the summit much easier.

For Jordi, the question was how, in such uncertain times, to allocate budget to something that you’ve never done and you don’t know the outcome of. So they picked a random budget that Forcemanager could afford to spend on testing organic reach, of € 5,000 (exclusive of headcount) which was a key factor in their success.

And, what’s more, they didn’t spend the full budget! Given that it was a relatively modest budget they were extremely pleased with the reach achieved.

Alex chatted to Jordi in detail about Forcemanager’s marketing process for the virtual summit and we’ll be sharing the all-important detail in our next post or you can listen to the full podcast audio of this interview on your favourite podcast platform.

Add Predictability to Your Pipeline with Intent Data

You can find Jordi and Forcemanager at: