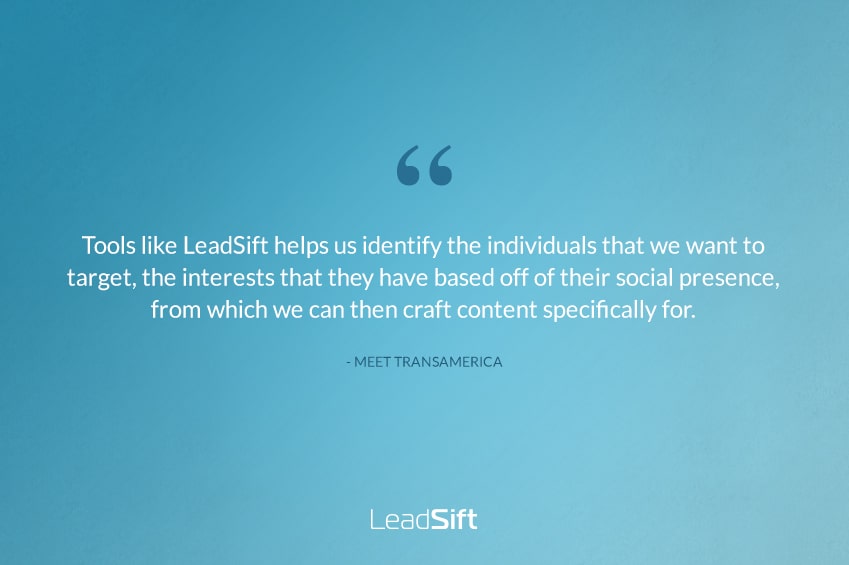 Social media as a marketing channel is a natural extension for several brands that approach it as though it surfaced along with print, billboards and TV decades ago. However even today, for old-school industries, the social media barrier still appears fearfully high.

The adapt or die analogy is rather harsh, but most industries faced with countless legal hoops find themselves confined to existing boundaries and as a result, limit their foray into social media. The reality is, they still need to reach future generations of customers where traditional marketing tactics and media no longer resonate.

What happens if one company – a decades-old insurance provider – decides it’s time to break down the barriers? This is Transamerica’s no-holds barred approach to social media, led by Allan Gungormez, former AVP Enterprise Digital Strategy.

Competition in the insurance industry is intense. What are some of the ways you are differentiating yourself?

Gungormez: I personally like to approach our social media footprint in ways that differentiate us from the rest of our industry. Frankly, we’re adopters of many platforms that our competitors don’t venture into. We’ve been named one of the best brands on Reddit by Reddit for two years in a row. We have a fantastic Tumblr presence that has won multiple awards. We’re on Vine and we’re launching a Snapchat channel in the next couple of weeks. We just released the first ever State of Financial Literacy on Social Media Survey and are currently working on a few other microsites to better enhance the customer experience on the web. We like pushing the envelope on social. While it may be a challenge to do because of the regulated nature of the industry, that challenge is a major reason why my team and I came to work at Transamerica.

Are there innovative ways you reach or engage with individuals?

Gungormez: People are flooded with content these days. Everywhere you go there’s something else that someone wants you to see. Brands aren’t just competing with each other on social, but they’re competing with people’s friends. We’ve found that the best way to get an edge on the competition was to develop very targeted personalized content. There’s no longer the idea that one type of content can fit all and brands can’t look at people as just age groups either. You could have a 40 year old woman who is an executive at a large company, a 40 year woman who is a mother of two, a 40 year old divorced woman with no kids, a 40 year old woman going back to college etc. Tools like LeadSift helps us identify the individuals that we want to target, the interests that they have based off of their social presence, from which we can then craft content specifically for.

With social media you seem to be ahead of the curve. How do you approach your social strategy?

Gungormez: The quick answer: with no limits. There are countless legal hoops to jump through in order to get something accomplished in the financial services world but I make sure that each person understands to never confine themselves into whatever boundaries already exist. We’re here to take all of the past experiences we have with more consumer friendly brands and innovate the space that we’re in now. A major way for us to do that is to understand the audience that we’re talking to on multiple levels. I don’t just want to know if someone is a high net-worth individual, I want to know their interests, if they have a pet, favourite brands, TV shows, etc. LeadSift helps fill in those blanks that financial service companies rarely tend to address. If you can really know your audience on a level that allows you to cater to them on a seemingly individual basis, your strategy is infinitely stronger.

How do you evolve your social strategy?

Gungormez: Advertising used to be a world that was two parts gut instinct mixed with tried and true methods of the past that had already gone through trial and error. There was a formula and marketers knew exactly what to suggest based on what the goal was. Need eyeballs? Take out an ad. Want traffic into your business storefront immediately? Create a limited time offer. Nowadays our strategy evolves through data. I like to say that it’s changed to two parts gut instinct and an equal amount of data to back that up. Tools like LeadSift allow us to create data-driven decisions based on what type of audience we’re going after. The data also allows us to more easily convey the rationales of our strategy to those within our organization. It’s much harder to shoot down what could be seen as social jargon when there are some strong numbers behind the strategy.

What impact have you realized using a technology (like LeadSift)?

Gungormez: The amount of data existing on social media alone about the people you want to reach is astounding. Also, if you ever thought that people might not be having conversations about your product on social media, you’re probably incorrect and a tool like LeadSift can back that up with data immediately.

“We ran an A/B test on a direct response campaign focused on driving Financial Literacy Survey completions. Using data-driven insights to target audiences with highly relevant content we realized an 86% greater engagement rate and a 74% cheaper cost per engagement than our baseline targeting and at a fraction of the cost of traditional media.”

I think that people in the industry never doubted that social could be a viable sales channel, and that’s been proven over and over again from an e-commerce model, but a tool like LeadSift helps prove social selling capabilities in more traditional models as well.

Gungormez: Coffee. LeadSift helps us know more about our current customers. By creating a two-way connection between our data and LeadSift we’ve been able to enhance the total picture of our customer and overlay some amazing interest traits on the data we already had, which allows us to ultimately create a much more personalized experience for our customers.

“When discussing life insurance, our campaign using audience lists from LeadSift had 5X the engagement rate of a standard campaign. We found this to be a significant spike considering each campaign focused around optional insurance, a topic that can be challenging to garner engagement with.”

There is a need to bridge the gap between online and offline. Most of the transactions in our industry still take place with a financial advisor offline, so it’s important for us to directly identify how social, and really digital as a whole, is enhancing the advisor selling experience. After we finish that there’s probably going to be more coffee involved.

What do you think the future is for your industry involving digital or social?

Gungormez: This is an industry that is at the point where there’s no longer a discussion of “do we need to be on digital” but rather “we need to be on digital yesterday.” There’s a bit of catch-up to be done overall and yet there are still new outside industry threats to be aware of that could disrupt the game at any minute. What if Google or Amazon decided to start playing in the financial services world? It’s a realistic thought that is now in our minds. Part of the industry’s future is happening as we speak with the rise of the robot advisors. That’s definitely a business model that lends itself quite well to digital marketing and could prove to be a direct threat to the financial advisor model (although a lot of data says people still like talking to a human). Digital certainly has a prominent seat at the table now and most of the companies that will still exist in the future have realized that it’s time to evolve or they’ll go the way of the dinosaurs.

Read more about Transamerica and LeadSift or start the conversation about LeadSift and your organization.