Develop an Emotional Connection with Your Prospects for Better Conversions 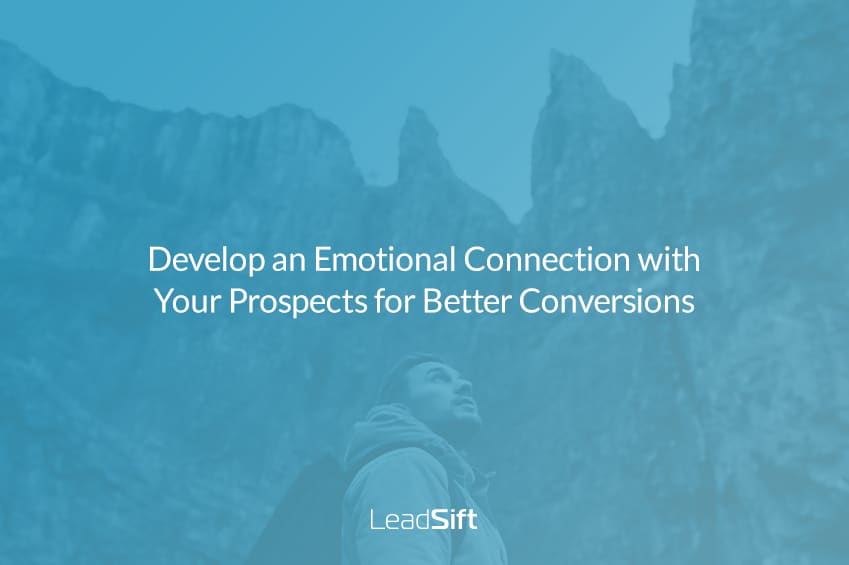 Think back to the last time you made a decision. Whether that was what shoes to wear this morning, or which vendor to go with for a 3-year contract, chances are there was some emotion involved.

And just like you, B2B buyers are buying out of emotion, make no mistake. They may tell you that it was “logic” that fueled that choice to partner with an emerging competitor, but don’t be fooled – they were swayed equally, if not more so, by their emotions.

There are various theories about which emotions affect our everyday decisions. David McClelland’s Human Motivation Theory, for instance, posits that we all have a need for achievement (accomplishing goals), affiliation (belonging to a group) and power (influencing others). By understanding which of the three factors your prospect is motivated by most, the theory goes, you can sell more effectively by speaking their language.

Other theories claim that there are six basic emotions that guide all decisions: greed, fear, altruism, envy, pride and shame. Understanding which of the six your prospect feels most strongly will help you couch your sales pitch in terms that resonate on their emotional level. For example, a newly hired exec at a Fortune 500 may be feeling a bit of fear that their position isn’t yet stable, and some pride at having recently been promoted.

Simply knowing that decisions are fueled by emotion isn’t enough, however. As you might have guessed, you have to know which emotions are being felt by your prospect in order to address them. And here’s where social media comes into play.

Social selling equips salespeople with the tools they need to identify their prospect’s emotions, either on an individual level or on a larger scale.

When it comes to the individual, you can dig into their public posts on networks like Twitter and Facebook, look at their past job history on LinkedIn, and comb through any previous correspondence or interaction they have had with your brand in the past. Using this information, you should be able to put together a solid picture of what is currently motivating your VIP prospect: Are they being driven by the need to fit in, or affiliation? Maybe they recently tweeted about a collaboration they would like to be part of, or their Facebook posts show an unwillingness to take large risks. Are they altruistic? Maybe they regularly retweet articles about eco-friendly government initiatives.

To scale this knowledge, you can use big data and grow your understanding of emotional positioning to your target market as a whole. Rather than zoom in on the tweets and actions of a single prospect, you look at what generally drives a larger group of prospects – what values do they share? This will show you what emotions they lean towards, which will in turn help you develop messaging to reach out to them.

Developing emotional connections with your prospects is one way to build long-term relationships with them, and in turn create more stable, consistent revenue streams. It’s also generally a good way to do business on the social web, as it shows that you are listening to your prospects concerns, needs and desires.