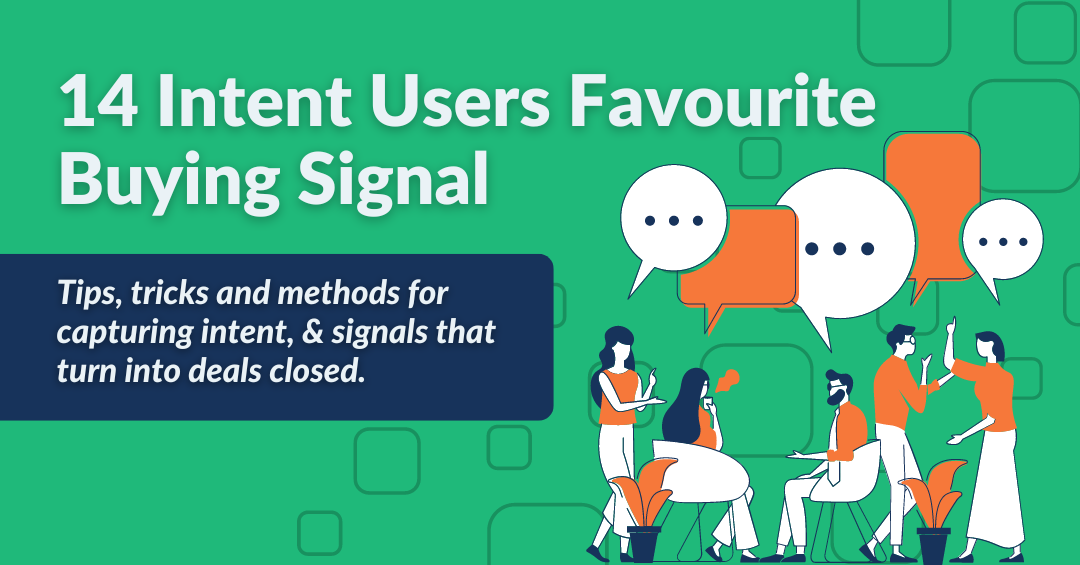 Intent can be abstract. Hard to understand unless you are using it (or selling it) every day. We put together a list of how real sales and marketing leaders use intent signals every day. What signals are their favourite, and why? How do they take a signal and turn it into a meaningful result? Let’s get into the nitty-gritty of how intent is ACTUALLY used in the day-to-day.

After consulting with 14 professionals about their top signals, a pattern emerged. We sorted these signals into categories. Navigate to each section to find what signals interest you the most:

If you are a B2B sales or marketing human, selling software solutions, this list is made for you. Find out what signals create the best leads, and unlock untapped intent sources for your team to leverage.

“Hiring and tech installs for outbound: is it fair to say ‘duh’? “

“For us, a lot of companies with recent funding get bigger marketing budgets, and bigger goals to hit so we know this is a perfect time to get in front of them. We also did customer/prospect research and found that a lot of inbound leads that come in have had recent funding.

We use Crunchbase and Cognism to pull a list of the most recent funding information. And then, we have specific LinkedIn campaigns with specific messaging around funding that we add those companies to every month.”

Signal – Recent Hires or Promotions (Ex: Starts a new role as VP of marketing at a software company)

“Similar to funding, we did some prospect/customer research and one of the common reasons our inbounds come in, is that they just started at a new company, they’re gutting and need a partner. We also have higher and faster close rates with new CMOs/VPs at new companies.

To monitor this, we use Cognism and Li. Sales Navigator to pull a list of the most recent promotions/hires at companies we could work with. After that, we have specific LinkedIn campaigns with specific messaging to those contacts being promoted or hired in the last 30 to 60, sometimes 90 days.”

“I want to tell you about my love for knowing when companies are hiring or installing new tech (these often go hand in hand).

Hiring and tech installs for outbound: is it fair to say ‘duh’?

For LeadSift, companies hiring a bunch of SDRs or installing sales engagement (or similar) tech probably means they’re scaling outbound, and are going to need a bunch of leads. This happens to be an easy fix with LeadSift so there’s a clear, concise way to reach these people. It’s easy for our SDRs to reach people with a problem we help solve, and personalize in a meaningful way.”

At Vidyard we love to use signals that indicate a Marketing or Sales team is growing, or potentially shifting focus. New job postings, a newly appointed CMO/CRO, or funding news all suggest their team may be ready to adopt new tools to create sales and marketing efficiency

“Hiring an SDR manager is a great signal for us. An SDR manager typically creates playbooks and cadences for when they first start, and then train and coach their team how to use them. This is exactly what we do at Growth Genie but we know it can take up to a year to hire, train and onboard an SDR manager, which is the pain we focus on when targeting these companies.”

Your website and landing pages are ground zero for buyer intent signals. If you’ve yet to properly get started with intent, begin by tracing high-value actions on your site that lead to purchase. If you haven’t invested in a first-party solution yet, you should get into it now and learn how to use it. From there, you can widen your scope to include review site data from places like G2 or Crunchbase (more on product comparison signals below).

“For Proposify, anytime our ideal customer is showing a number of big time ‘I’m considering Proposify’ signals like visiting high-intent pages on the site or taking actions on high-intent sites like G2 – this triggers an alert in Slack. The first BDR to hit  ✅, prospects the account. This helps us contact the prospect just at the right time.”

“Identifying the anonymous accounts visiting your website is a powerful intent signal that an organization is in the market to buy. By understanding what pages they have visited and the content they have engaged with, you can tailor your messaging to provide them with the most relevant information at the height of their interest.

Sales receives Slack notifications when a target account or net-new account engages with our website. Marketing then uses our Google integration to do retargeted advertisement based on the identified accounts.”

It’s all about content these days. If you have an eye on what topics your prospects are reading up about, that’s an early sign that you can use to get your foot in the door and start distributing solid thought leadership.

“Outside of  ‘Contact Us’  forms and users clicking ‘I want to talk to sales’ via chatbots, unsurprisingly, intent is really difficult to nail down.  We’ve seen that you could have 10 different users clicks the same ‘high intent’ asset and find they’re at completely different stages in their journey.  That said, one somewhat consistent signal we’ve seen is users coming from thought leadership, solution-adjacent webinars. We spend time to understand our users via product marketing, customer success, and sales feedback loops. With those insights, we decide what content and topics will resonate most with our ICP and bring those topics to life via webinars which convert to high intent leads at a rate of anywhere from 20-40%. It’s not a perfect science, but we just keep our eyes on the data and our ears towards our customers and prospects.”

“For us, it’s great to understand what a marketing company’s greatest demand gen challenge might be through examining activity around terms like data quality, global reach, or lead engagement. An intent signal like that is valuable for us because we already know that our ABM accounts are actively engaged in demand gen initiatives, but backed with an intent data point like the above, we can create more personalized outreach and tailored solutions from the onset of our interactions with target accounts.”

We found that competitive signals rise in the final stage of buying while all third-party signals drop by 52%. If an account is showing competitive engagements, it’s time to double down on your efforts. Social proof, highly targeted messaging, and persistence is key to winning these deals.

“The profile of an account goes a long way toward determining which intent signals are most relevant. For a greenfield account, we’re more likely to prioritize signals that indicate an active product comparison is underway, whereas for our competitors’ customers it’s more effective to watch for risk signals indicating troubles with implementation, ROI, and so on.”

“For Pitch121 and our clients there are clear signals for intent on our LinkedIn feeds.  The secret sauce for me on Leadsift is finding those in your target market who have followed or engaged with a competitor.  Added bonus is that you know who exactly did that with the LinkedIn URL.  Other tracking or intent tools I’ve used tell you ‘someone at your target company’ – leaving you fishing for who that might be.”

To target prospects by tech stack we recommend getting a data solution that enriches accounts with technographic data, does your solution work well for Salesforce users? Did you just release a HubSpot integration? LeadSift can help you find who’s installed a solution that compliments yours.

“At Copado, we have a pretty niche persona so we spend time researching the skills that prospects list on their LinkedIn page; for example, if they have “Salesforce” or “DevOps” or even one of our competitors listed, those tend to be a great starting point for us because that indicates they see the value in a DevOps tool and potentially used our product at a past company or have at least felt the pain points in a typical DevOps process.”

“Typically when people take on a marketing automation solution, they see intent data as their next step. I look for that as an intent signal.”

“Based off the clients current customer base, enriching the data and finding similarities based on AOV. For example, AOV is 27% higher when they have 50+ people in sales . Those triggers can be found using people data labs (# of people in a department), using BuiltWith for the active tech count and Slintel for technology.

The biggest thing we’ll do is create specific messaging and ads for each of the triggers. For example, if they use a specific ABM platform, have messaging that talks about how their tech integrates or compliments it.”

“When you go to reach out, you’ve got the trigger event that they’re in a new position. You’ve got the empathy to say ‘I know you just landed there, but maybe in a few weeks when you’re settled we should talk’. And the best part, you have a second reason for that conversation.”

“Picture the scene. The decision-maker you spoke to, who became a customer… just left the company they work for a few months after signing with you. You know them, you’ve helped them, and they’ve trusted you to solve a problem in their work.

But now they’ve gone to a new company. You can use the “social credit” you’ve built up with them over the course of the relationship and how it started, but that might not quite be enough. We don’t want to come into their inbox on the 3rd day of their new job and ask what are their priorities, and can we meet. That shows a lack of empathy and understanding. Starting a new job means a lot of things, meeting with salespeople is pretty low on the agenda in the first few weeks at any job.

How can we help the rubber hit the road here? Involve another trigger event, to increase the relevancy.

For example, find if the company they’ve moved to is using a competing tool. This could be done via a Chrome Plugin (varying accuracy), searching on G2 for reviews by their colleagues, a LinkedIn Sales Navigator search for technologies used within the account.

Now when you go to reach out, you’ve got the trigger event that they’re in a new position. You’ve got the empathy to say “I know you just landed there, but maybe in a few weeks when you’re settled we should talk”. And the best part, you have a second reason for that conversation. Not just relying on your prior relationship to book that call. You’ve found the contextual, account-level trigger event too which merits the discussion for them in this current role and at this company. Without that, you’re much less likely to get the call.”

Signal: POC’s Moving to Another Company

“We have very high response rates and close rates with customer POC’s moving to another company. Right now, monitoring this signal is a manual process. The only company I know that does this at scale is Usergems, who we’re looking into now.

The audience size for these people isn’t huge so we can’t do anything on the advertisement side but we do have AE’s that reach out to these people via Linkedin to get the conversation started.”

What Signals are You Missing Out On?

What signals will you be tracking next? No one can do it all, so take what resonates and leave what doesn’t.

Let us know what signal intrigued you the most!

Get Your Free Custom Intent Report

If you know your prospect’s next step, could you get there before competitors?

Get a free custom intent report to find out who you should be talking to right now.